EPAC is on an artistic roll, and the 2015 season promises to be no different. We have put together an amazing selection of plays and musicals that will make you laugh, cry, sing out loud, and contemplate our common humanity. The 2015 season is guaranteed to both enlighten and entertain you!

Photos from our Sneak Peek Cabaret at Tellus 360 – 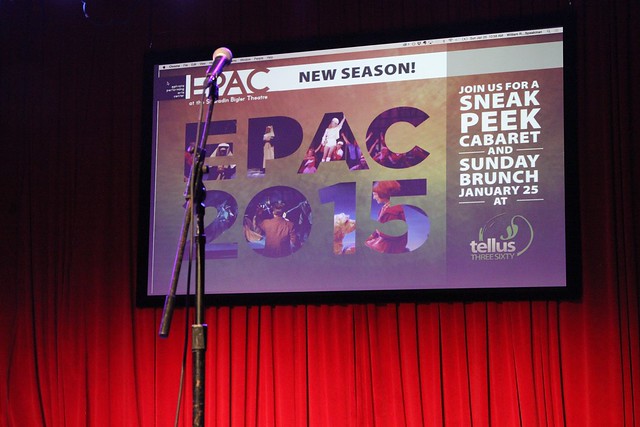 Join our family as an EPAC subscriber, show sponsor or volunteer and help us make 2015 our best season
ever!

With a story based on the fairy tale by Hans Christian Anderson, this EPAC Kids4Kids production will take you and your family on a fun fantastical journey to a vast underwater kingdom!

When Ariel, the youngest mermaid in her family, gets a glimpse of the handsome land-loving Prince Eric, she is willing to give up everything to become human. But for her wish to come true, she must first face her father King Triton, skillfully maneuver past the evil sea witch Ursula, and win Prince Eric’s trust.
More

With a brilliant score that includes uplifting songs like “Under the Sea” and “Part of This World,” this musical treasure is designed for young artists as well as younger audiences, making it the perfect family treat!

Show Details
August: Osage County offers a searing glimpse into the lingering disputes that often exist within the modern American family. This fiercely funny and hauntingly poignant black comedy exposes the emotionally exhausted Weston clan as they gather to ponder the disappearance of the family patriarch, Beverly Weston.

Critics and audiences agree that August: Osage County is the first great American play of the 21st century. The play garnered five Tony Awards in 2007 and a Pulitzer Prize for Drama in 2008. A modern masterpiece, it explores the often confrontational yet humorous nature of family relationships, making it the perfect show for any fan of the EPAC edge.

We are thrilled to include this modern classic in our 2015 Season as another example of theater that matters.

April 30 – May 16
Show Details
Follow the brave Sir Robin and the Knights of the Round Table in this hilarious Tony Award winning musical version of the 1975 cult classic Monty Python and the Holy Grail. This absurdist musical comedy, which won the Drama Desk Award for Outstanding Musical & Lyrics, is based loosely on the Arthur legend…very loosely.

Set in medieval England and with memorable characters like the Black Knight, the terrifying but silly Knights who say Ni, and of course the Killer Rabbit of Caerbannog, this fabled musical send up is not dead yet…really, it’s not dead yet!

EPAC fans have been waiting for this show for a long time, so make your plans to see it early! If you feel that seeing this show will turn you into a newt, we promise you’ll get better.

June 11 – 27
Show Details
EPAC audiences are sure to enjoy the antics between Felix Ungar and Oscar Madison as they test each other’s patience while enduring each other’s annoying tendencies in a New York apartment. Can two divorced men share an apartment without driving each other crazy? Who knows, but it will certainly be hilarious to find out!

Considered the greatest hit of Neil Simon’s career, this Tony Award winning play opened on Broadway in 1965 and ran for 964 performances before being crafted into the 1968 film starring Walter Matthau and Jack Lemmon. In 2006 the play enjoyed an extended run on Broadway with Nathan Lane as the slovenly sports writer Oscar and Matthew Broderick playing the neurotic Felix. EPAC is delighted to present this cherished classic American comedy.

In this hysterically funny musical comedy French Riviera nightclub owner Georges and his longtime love Albin feel they must conceal both their lifestyle and their ownership of the drag club downstairs when Georges’ son Jean-Michel brings his fiancée’s ultra-conservative parents home for dinner.

In 1996 the movie version The Birdcage brought this entertaining romp to the big screen and starred Robin Williams, Nathan Lane, and Gene Hackman. With its message of inclusion and acceptance, this show is more relevant today than ever, making this big summer musical comedy a great example of theater that matters.

September 3 – 19
Show Details
Set in Victorian London, The Elephant Man is based on the life of the severely disfigured John (Joseph) Merrick as he struggles to transition from an exploited freak show exhibit to a life of dignity. However, Merrick’s subsequent transition into normal society and his strong desire to be treated like a normal human being do not go as planned.

The original 1979 Broadway production won three Tony Awards including Best Play. Merrick’s tragic story was also adapted into an unforgettable 1980 David Lynch film that starred John Hurt, Anthony Hopkins, and Anne Bancroft. The social relevance of The Elephant Man is ever-present as it looks at issues of social morality and misplaced charity, as well as how each of us is often frightened by what we don’t understand.

Book by Lawrence D. Cohen
Music by Michael Gore
Lyrics by Dean Pitchford
Based on the novel by Stephen King

October 15 – 31
Show Details
Based on the Stephen King novel and a 1979 Brian DePalma film starring Sissy Spacek and Piper Laurie, CARRIE the Musical lives far from the lore that surrounds its pop culture history. At its core, it is an evocative thriller that tugs at the heart of what it means to be a teenage outcast.
Living with her religiously oppressive and socially inhibited mother, the vulnerable Carrie struggles to control her telekinetic powers while finding no comfort from her less than understanding peers. On prom night, Carrie faces the ultimate visceral humiliation that leads to her loss of self-control and sets her on a vengeful path to her own demise.

CARRIE the Musical is not the EPAC camp romp you may expect it to be, but is rather a thrilling fable that is certain to entertain fans of King’s novel.

Show Details
Fans of the film version starring Mike Myers and Eddie Murphy will not be disappointed, as all of your favorite fairytale creatures come to life in this perfect family holiday musical delight.

When the ogre Shrek’s home swamp is overwhelmed by homeless fairytale creatures, he loses his cherished privacy, so he sets out to set things straight with the evil but very undersized Lord Farquaad. To regain his home, he must first rescue the Princess Fiona who has a rather large secret of her own. Things are never what they seem in this fractured fairytale that includes many of your children’s favorite characters.

View all past productions