Disney’s Beauty and the Beast is a musical story of love, adventure, and redemption. The book was written by Linda Woolverton with music by Alan Menken and lyrics by Howard Ashman and Tim Rice. Based on the award-winning 1991 animated film by Walt Disney Animation Studios and the original French fairytale by Jeanne-Marie Leprince de Beaumont, this story reminds us that true beauty lies within. A young and selfish prince, obsessed with beauty, is cursed by an Enchantress until he can learn its true meaning. In a small French village, the beautiful but strange Belle dreams of adventures like the ones she’s always reading about in books. When Belle discovers that her father has been imprisoned by a beast in an enchanted castle, she courageously trades herself for her father’s freedom. But perhaps Belle’s dreams are about to come true in a way she never expected. Can true love break the curse?

Join the fun at EPAC and watch the Beast battle the beast within!

Win a keepsake poster commemorating Disney’s Beauty and the Beast 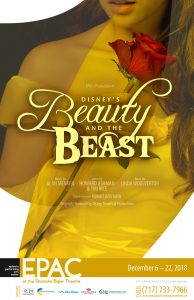 This special legacy piece is going to be raffled during the run of Disney’s Beauty and the Beast with the drawing to be held closing day, December 22. You need not be present to win! Raffle tickets will be sold 1 for $5, 3 for $10, and 8 for $20, with all proceeds benefiting the Ephrata Performing Arts Center, your home for theater that matters!